As an only child and an independent type, Ariana Williams set out to carve her own path from Riverside Poly High School when she chose to play volleyball at the University of Oregon.

Now she’s helping the Ducks travel down a road never before explored with their first appearance at the final four.

Having developed into a premier middle blocker for the Ducks, Williams hopes to maintain that level of play when facing top-seeded Penn State in a national semifinal match today (6 p.m. PT, ESPN2). 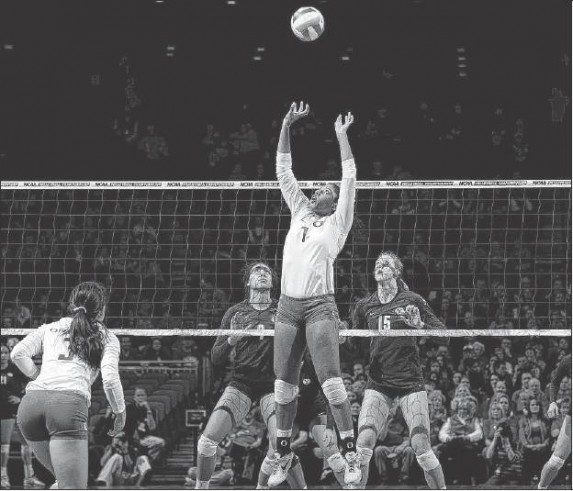 “Going back to a couple of years ago, we roomed together as freshmen and she was the only freshman here for all the winter and all the spring terms,” said teammate Lauren Plum, a junior setter from Poway. “We had middles just transfer out, so Ari’s gone (through) so many reps and she’s so excited to be here. She’s playing great right now.”

As freshmen roommates, Williams and Plum had something else in common: They would always leave something behind when packing for a road trip. This one is no exception.

The team was told to prepare for a possible lengthy trip — with final exams complete, the Ducks traveled straight from the regional in Omaha, Neb., to Louisville this week — but Williams picked up another pair of game-day sweats from the local mall. She forgot to pack more than one pair.

On the volleyball court, however, Williams and Plum make a great pair.

With 13 kills, one shy of her career high, in each of last weekend’s matches against Brigham Young University and Nebraska, Williams was named to the all-regional tournament team, along with Plum. Senior outside hitter Alaina Bergsma was tabbed the Omaha regional’s most outstanding player.

It was the biggest back-toback weekend performance of Williams’ collegiate career.

“Lauren has been setting me perfectly lately, making sure all my sets are off the net and in the right location.” said Williams, who finished sixth in the Pac-12 in hitting at a .353 clip.

Evident by her selection as the Ducks’ most improved player in each of the last two seasons, Williams has come a long way since the Ducks last played Penn State a year ago. The Ducks defeated the Nittany Lions, 3-1, to end PSU’s 94-match home winning streak.

“I got one good kill. I was like, ‘Yeah!’ Then I went back to it and I got stuffed straight down,” said the chuckling Williams. But she also vividly remembers the matchwinning shot by teammate Katherine Fischer that halted PSU’s streak.

Williams cites former Poly girls volleyball coach Donna Neece for instilling the discipline that Williams lacked early in her high school career. Recalling what was referred to as ‘horrible hell week,’ Williams said the team did plenty of running.

“We had to a lot of things we didn’t want to do, but it really helped. I’m very appreciative of that,” said Williams.

The extra laps have paid off, positioning Williams to enjoy the best days of her volleyball career.