North’s Almaguer Player of the Year

The senior, who went 61-1 this season, is the HSGameTime Girls Tennis Player of the Year for the second straight year

This story appeared in The Press Enterprise on 12/25/2012 by Richard Dawson.

Jasmine Almaguer capped off her stellar high school career with an exceptional senior season for Riverside North to become a back-to-back HSGameTime Girls Tennis Player of the Year. 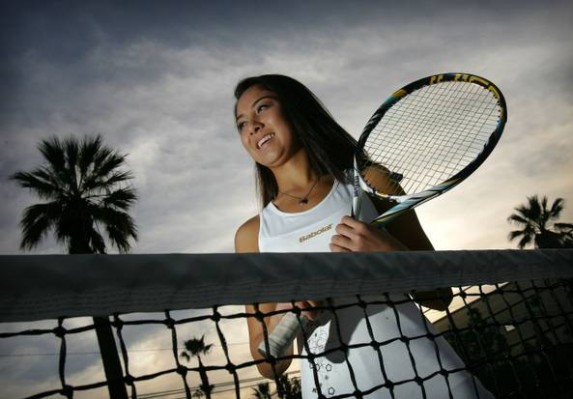 The performance Almaguer put on during her junior season made for a tough act to follow. However, Almaguer did just that in 2012, going undefeated in the Inland Valley League and the playoffs to lead the Huskies team to their first CIF-SS Division 5 finals appearance. She also reached the quarterfinals in the CIF-SS individual championships to finish the season 61-1.

Almaguer’s lone loss came in the individual championships, a hard-fought 6-7 (5), 7-6 (3), 10-7 defeat. There were only two matches during the season in which Almaguer lost more than two points to opposing players, and there was also a stretch of six straight sets where she did not lose a single point.

Bringing such an elite effort all year can be attributed to improvements made in the offseason.

“The most notable one was my serve,” said Almaguer. “Even when I came back and started practicing this year, coach said my serve looked better. My service games that were weaknesses last year became my strength this year.”

Despite the fact that both Almaguer’s team and individual seasons ended in a loss, the overall journey with her teammates is something that has meant more than any awards or titles.

“At the beginning of the year I would have thought it would be great if I finished senior year with us winning CIF,” said Almaguer. “When it came down to the finals and we lost (to Carpinteria), it didn’t matter to me anymore. I was more upset, and I even sent a text to coach that night, I was sad that was going to be the last time that we were going to play as a team together.”

Almaguer will be moving on to college and has committed to play for the UC Riverside women’s tennis team under coach Mark Henry in 2013.

“When she gets to college, her game is going to explode,” said North coach Nick Mateljian. “Jasmine has so much potential. She will get to enjoy the team concept again at a much higher level. She will play good players day in day out, that play tennis year round. That is something she doesn’t get at the high school level.”

Stepping up in competition will bring its share of challenges, but Almaguer believes her non-physical tools will prove to be an advantage moving forward.

“What will keep me going is my mental game,” said Almaguer. “A lot of people don’t consider that tennis is such a mental game. Mentality has always been such a strong suit of my game and I think that will carry me through in college tennis.”